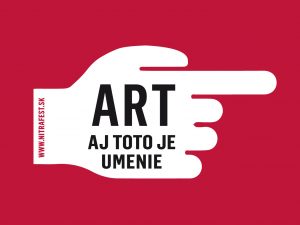 2020 = 4 + 4
The theme of this year’s International Theatre Festival Divadelná Nitra, territory ethos, might be understood as one of the main functional contexts of the long-standing project This Is Art, Too. The project’s primary aim is to mark forgotten or overlooked works or architecture and art within the city of Nitra. We understand such works in two ways. Firstly, as values created here or for this locality by someone in the past through architectural or artistic activity – in that case, we might appropriately raise the question of moral responsibility for these works, which form a part of our cultural heritage. Secondly, we also bring attention to monuments that testify to past events and the actions of our ancestors, communicated directly in largely architectural-sculptural form, and their frequent neglect is all the more reckless given that they are not simply pious mementos but also vehicles of fundamental moral guidance for the future. 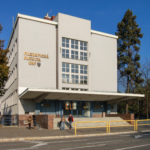 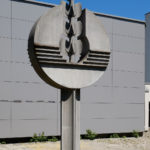 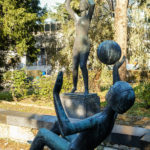 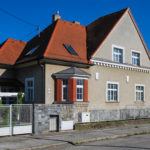 The seventh edition of This Is Art, Too introduces two fours. The previous 39 objects, labelled with our now-familiar signs, will be joined four new points of interest. Among the overlooked works of architecture, we have chosen the residential area at Zobor, the so-called Postman Colony, designed by architect Václav Jiránek in the earlier half of the 1920s, and the seat of the District Health Insurance Company by architect František Faulhammer from 1937 – 1940. The collection of public art will now include the sculptural fountain Joyous Motherhood on the grounds of the University Hospital Nitra by sculptor Ludwik Korkoš from the 1950s/60s, and Ear, a sculpture made in 1984 for what was then then Academy of Agriculture in Nitra. By marking the final in this year’s row of four artworks, we also commemorate 90 years since the birth of its author – academic sculptor Štefan Belohradský (1930 – 2012).

At the initiative of Association Divadelná Nitra, the project will be enriched with yet another four – a series of four short documentary videos on selected themes of the project. The first video presents a choice of the finest war memorials in Nitra, while the following three gradually explore the new city quarter of the young Czechoslovak Republic, the adjoining Párovce I Housing Estate, and the most valuable residential area by architect Michal Maximilián Scheer in Nitra, Chrenová I Housing Estate, including the sculptural artwork of Tibor Bartfay. The videos partly rely on drone footage and so fulfil our ambition to look at better- and lesser-known buildings and sculptures from a different angle of view – not simply on the basis of information but also with the aid of modern technology, offering perspectives unavailable to the ordinary pedestrian. The videos were authored by young successful creator Lukáš Búš. They proved very popular, and we are hoping to add more next year.