For eight years in a row, the project This Is Art, Too actively enters Nitra’s public space, highlighting its better and lesser-known works of architecture, urbanism, and art. Using simple banners with basic information, it marks out seemingly unremarkable, underappreciated, but also often unmaintained, devastated, or even no longer existent objects. Objects that we pass by daily without realizing they are or were works of human reason and artistic creativity just like those we consider landmarks, symbols or icons of the city, and which we pay due attention. Besides their artistic value, they are vehicles of the stories and fates of their authors, locals, or owners, and undeniably form a part of our city’s history and the cultural heritage of Slovakia and Europe.

This Is Art, Too is not simply about banners placed in the public space and the corresponding artworks. It also involves systematic research and dramaturgy for each edition, which simultaneously reflects the current theme of each year’s International Theatre Festival Divadelná Nitra. The project was conceived in 2014 by Association Divadelná Nitra, which initially partnered with members of the project Container for Contemporary Culture, and since 2015 it is curated by art historian Richard E. Pročka and culture scholar Juraj Novák (in 2018, they formed the civic association Nitra Cultural Heritage).

Over the past seven years, Nitra built up a total of 43 locations labelled with the logo of This Is Art, Too – an open hand pointing at a point of interest nearby. Changing times required us to seek new, more modern and attractive presentation forms for our project outputs (information about the project available year-round on the festival website, annual guided tour during the festival, video-presentation of selected objects in 2020). The project aims to inspire other cities in Slovakia similarly to begin marking out forgotten works of architecture and art in the public space.

This year’s edition of the project features a number of interesting activities.

First, a presentation of the new seat of Association Divadelná Nitra, the new culture and community venue bod.K7 in the building of the former Nitra General Bank, which will be labeled with a brand-new banner. The Association’s new home will thereby become part of its own project. 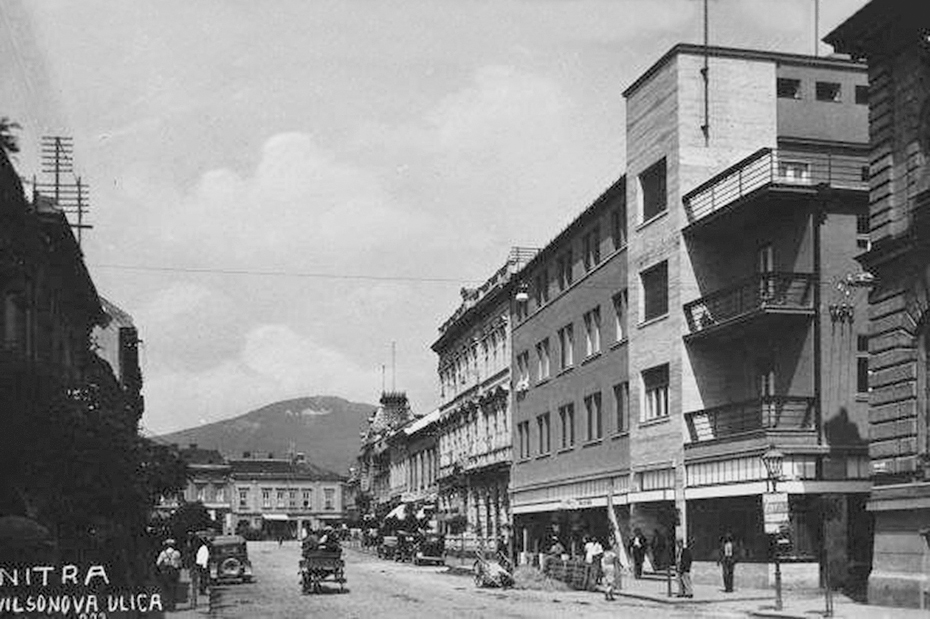 The building was designed in 1928 – 1930 by young architect Ferdinand Silberstein from the studio of Milan Michal Harminec. It was built on the corner of Štefánikova trieda and Radlinského ulica in 1931 – 1933 by local contractor Ján Tomaschek. The building’s heart consists of two asymmetrically tall street wings with ground-floor retail spaces and residential apartments in the floors above. Its overall composition is complemented and balanced by a third, vertical volume – a stair tower opening onto each floor. The building was listed as a national cultural monument in 1998 for representing a valuable piece of functionalist heritage. The commercial level with large steel show windows and travertine façades, occupied successively by a Tuzex luxury goods shop, a branch of VÚB General Credit Bank, and most recently a bookstore, was long vacant. Following reconstruction and revitalisation work, Association Divadelná Nitra reopened the space

as a new culture venue: bod.K7 – space for culture, creativity and community in September 2021.

This year’s edition of This Is Art, Too will also feature a mobile application, offering the broader public a modern way to learn about the project and selected objects through photographs, texts, and an interactive map.

One of the most important steps forward in the project’s history will be the production of new banners – this was made possible through a grant by the Ministry of Investments, Regional Development and Informatization, which Association Divadelná Nitra received to cover its regional activities, including equipment for the new bod.K7 space for culture, creativity and community.

Where Culture Dwells
Saturday, 2 October 2021, 4.00 PM – 5.30 PM, from the K. Spišák Old Theatre (ulica 7. pešieho pluku) to bod.K7 (Štefánikova trieda 7)
Guided tour for the opening of bod.K7 with culture scholar Juraj Novák, introducing the past, present and future locations of Nitra’s culture venues, places and people who have formed, form or will form the cultural environment in Nitra. Meeting at 3.55 PM in front of the Karol Spišák Old Theatre at ulica 7. pešieho pluku 1.