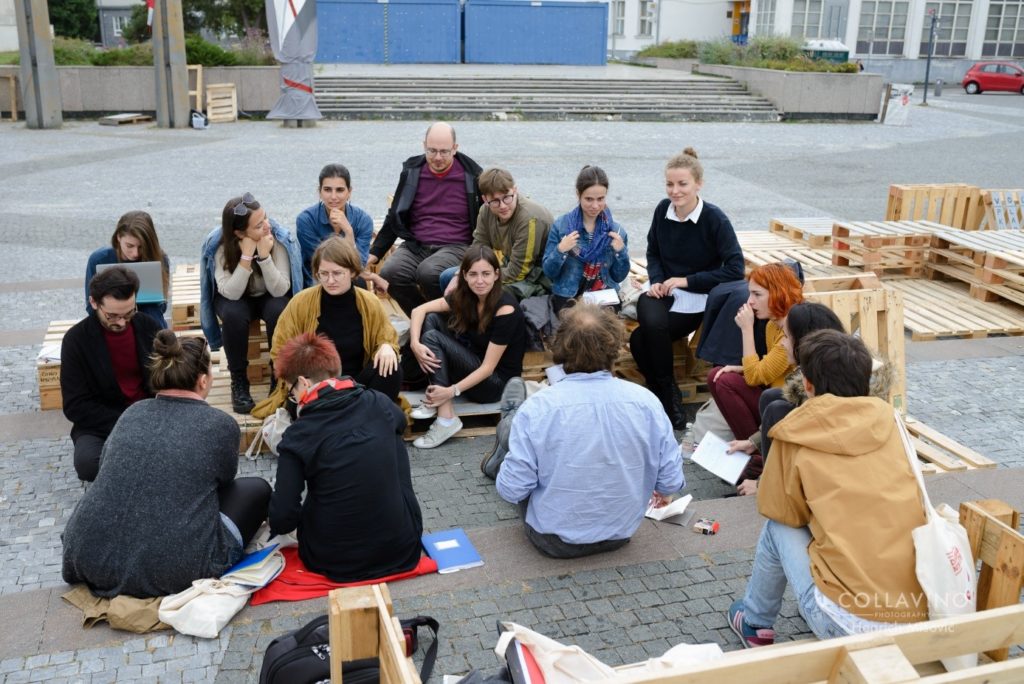 V4@Theatre Critics Residency is a creative platform for theatre critics from Central and Eastern Europe up to the age of 35. The project was initiated in 2015 by Association Divadelná Nitra in collaboration with partners from participating countries. Since its inception and with the support of the International Visegrad Fund and Slovak Arts Council, it has steadily grown its base of participants, represented countries and mentors.

The project aims to foster critical reflection on theatre, map new tendencies in contemporary scenic art production, and introduce innovative methods of analysing highly specific and experimental artworks. During the residency, a group of selected theatre critics take active part in the International Theatre Festival Divadelná Nitra, sitting in at programmed festival performances and analysing them at ongoing meetings with residency mentors.

Over the years, the festival residency has taken place under the guidance of respected foreign theatre scholars and theatre critics Patrice Pavis (FR, 2015-2018) and Thomas Irmer (DE, 2017-2019), Stefan Tigges (DE, 2019-2020) and Darko Lukić (HR & DE, 2020), who facilitate this intercultural dialogue on contemporary art.

Besides serving an educational purpose, the V4@Theatre Critics Residency project is also a platform and space for international cultural exchange and mutual sharing of knowledge about current developments in the scenic arts field within Central and Eastern Europe. To this end, we created the mini-project V4@Networking&Reminiscences, connecting current and former residency participants with other theatre professionals attending the festival.

In view of the current pandemic situation, this year, we have decided to organise the residency in two forms:

Residency in Nitra during the International Theatre Festival Divadelná Nitra

The first residency will take place in Nitra during the festival and will be open to young theatre critics up to the age of 35 from the Visegrad countries – the Czech Republic, Hungary, Poland and Slovakia. Over 6 days (1 – 6 October 2021), participants will attend analytical seminars under the guidance of respected German critic Stefan Tigges, lectures and mentoring by Darko Lukić, sit in at performances within the festival’s main and accompanying programme, join discussions with artists and meetings with project participants and guests of ITF Divadelná Nitra.

A virtual residency scheduled for November will be closely related to the festival programme staged in Nitra a month earlier. Theatre critics up to 35 from the Western Balkans, Eastern Partnership countries and Russia will take part in online seminars, lectures and discussions under the guidance of Stefan Tigges and Darko Lukić. Participants will have access to recordings of selected productions from the festival programme, they will be invited to discussions with the productions’ creators and actors, and together we will share knowledge about the current state of performative art and changes that occurred during the pandemic.

Stefan Tigges, Germany, is a theatre scholar. He works internationally as a lecturer and researcher (at the Universities of Bochum, Mainz, Vienna, Avignon, Rouen and elsewhere) and has recently completed his habilitation on the theatre of director Jürgen Gosch and stage designer and director Johannes Schütz. Stefan specializes in contemporary theatre, drama and performance art, methodological approaches to performance analysis, the concepts of space and place in theatre, as well as dramaturgy-related discourses. In 2009− 2012 he represented Schaubühne Berlin in the European theatre network Prospero, and in 2017 −2018 he was a visiting researcher at the University of Music and Performing Arts Graz. Some of his publications include: From World Soul to Über-Marionette. Chekhov’s Dream Theatre as Avant-Garde Experiment (2010); Dramatic Transformations. On Contemporary Strategies of Writing and Performance in German-Speaking Countries (2008, ed.); Interludes. New Texts, Perceptive and Fictional Spaces in Theatre, Dance and Performance (2010, co-edited with K. Pewny and E. Deutsch-Schreiner); Drama After the Drama. Transformations in Dramatic Forms in Germany After 1945 (2011, co-edited with A. Pełka); Jean Jourdheuil. Borderlines (2015, co-edited with Ch. Schmidt). Actually, he teaches at the universities of Graz (KUG – Schauspiel), Vienna (TFM), Leipzig (HfMT M. Bartholdy – Dramaturgie) and Staatliche Akademie der Bildenden Künste Stuttgart and is associated researcher at Hildesheim (Inst. Für Medien, Theater u. Populäre Kultur).

Darko Lukić, Germany / Croatia, is a theatre scholar, researcher, teacher and theatre practitioner from Croatia living in Germany. He has worked at the Academy of Dramatic Arts — University of Zagreb, the Faculty of Humanities — University of Zagreb, and Karl-Franzens-Universität Graz in Austria. He has lectured, taught and led workshops in Brazil, Bulgaria, Costa Rica, Croatia, France, Germany, Italy, Romania, Slovenia, Spain, USA, United Kingdom, Taiwan and Venezuela. He was mentor and trainer for the Audience Development and Capacity Building programs in Rijeka 2020 European Capital of Culture, an educator for the ADESTE+ European program for audience development, and a regional coordinator for EURODRAM. Since 2020 he is an expert in Pool of multi-disciplinary experts in The Capacity Building for European Capitals of Culture, AEIDL – European Association for Local Development, Brussels. He is also a certified TQ trainer (Teaching Intelligence — educator for educators) and e-learning course designer. He completed his predoctoral research at the Tisch School of the Arts — New York University, and his postgraduate studies at the Institute for Theatre Anthropology — University of Copenhagen and the European Academy for Culture and Management in Salzburg. He recieved his PhD in theater studies at the University of Zagreb. He was artistic director of the National Theatre in Sarajevo and Theatre &TD in Zagreb, and Vice Dean and Deputy Dean at the Academy of Dramatic Arts — University of Zagreb. His many published studies in drama and theatre include the books The War Trauma Drama, Theatre in its Environment — Theatre Identities, Introduction to Theatrical Anthropology, and Introduction to Applied Theatre.

Should you have any questions, please do not hesitate to contact Terézia Bosmanová at bosmanova@nitrafest.sk or +421 940 640 974