What is freedom? What are its faces and limits? Divadelná Nitra invites to explore the answers through the art 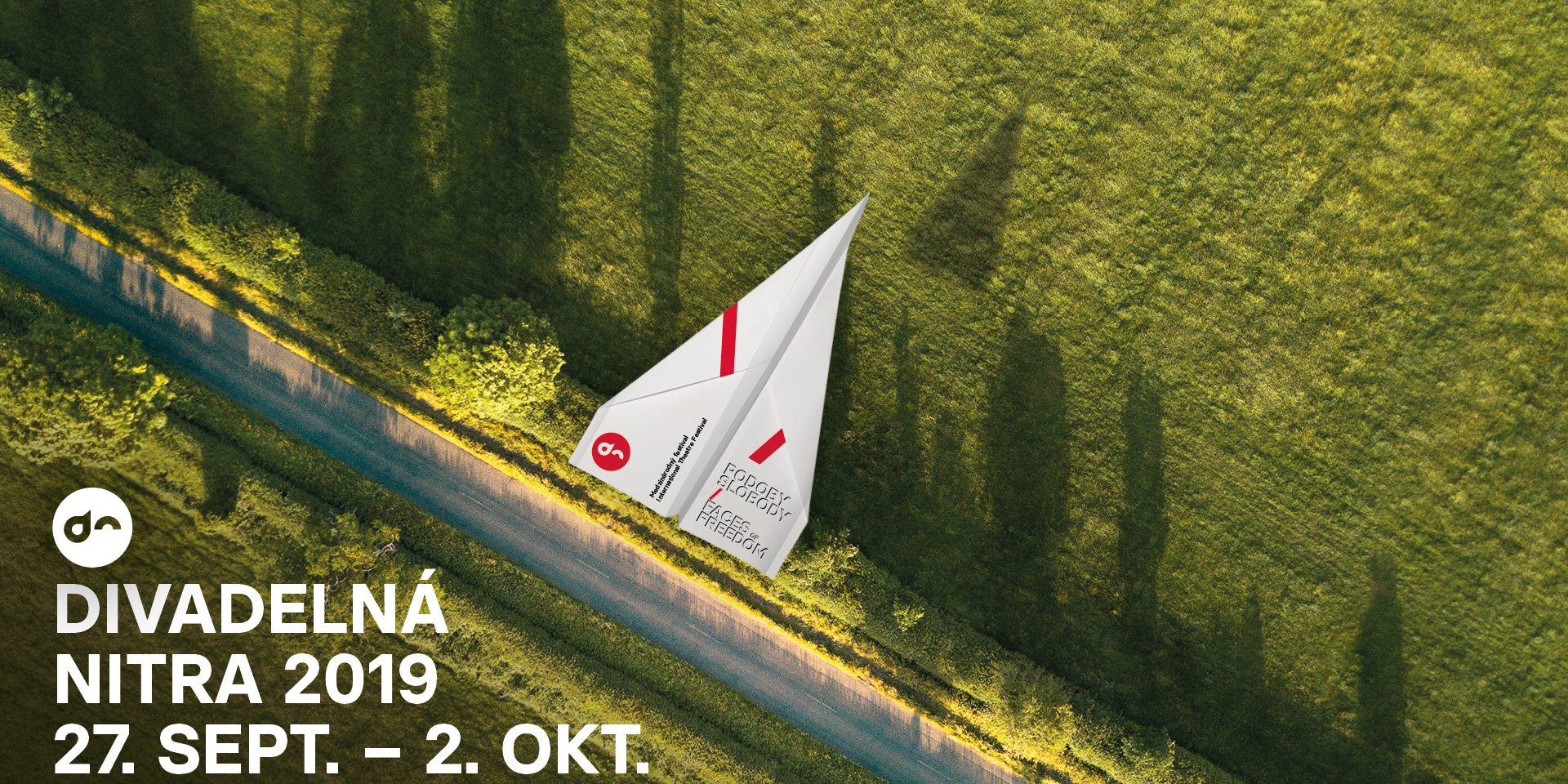 30th anniversary of the fall of Communism lends an opportunity to celebrate the freedom we won, and yet also to contemplate the faces of freedom in the world today. The 28th edition of the International Festival Divadelná Nitra (27. 9. – 2. 10. 2019) opens space for lively debate about freedom, unfreedom and the fragile line between the two.

Freedom of thought, opinion, movement, creative activity or communication. Freedom of an individual and society. Divadelná Nitra – the most defined festival of stage art in Slovakia – carries on its tradition of highlighting pressing socio-political issues. The focus of the 2019 edition is faces of freedomshall be reflected in the smorgasbord of noteworthy stage projects from Slovakia and abroad, and in the range of off-programme events.

“For thirty years we have been living in free society. Yet many among us fail to fully appreciate the meaning of freedom, its value or limits. Members of the younger generations, in particular, consider freedom to be an integral part of personal and public life. The major anniversary of November’89, the milestone in history of Central and Eastern Europe, lands an opportunity to remind ourselves of the faces of freedom and realise its value,”explains Festival Director Darina Kárová. She further points out that the fight for freedom isn’t a continuous exercise. Hence, it does make sense to speak about it: “We keep experiencing first-hand what it means to have the freedom of travel and business, freedom to publish or protest. Yet also what it means also not to be free to speak against authorities, to become indebted for life, to raise our children for the uncertain future of Earth. We are inundated with expressions of freedom – all the way to fake news and hoaxes. We come face-to-face with self-confident visions of one’s own freedom only to discover that freedom of one may mean limitations to freedom of the other. The line is fragile indeed.”

The faces of freedom in time and space is the leitmotif of twelve productions brought by commended theatre companies from the Czech Republic, Russia, Germany, Poland, Hungary, and Slovakia. “We face the evidence of breach of freedoms in Slovakia, along with the neighbouring countries, and elsewhere in the world. That tests our threshold of sensitivity to freedom. Ultimately, it raises our awareness of the fact that freedom must be relentlessly protected,” adds Kárová.

Fight for freedom from Antiquity to the present day

The theme of morals and its immortality is addressed by quite a number of productions that draw from the past. The Festival opens on Friday, 27 September with the operatic hit Sternenhoch from the National Theatre in Prague. The expressive work by Franz Kafka’s contemporary, the unfathomable Czech author and philosopher Ladislav Klíma, is a story of the fallen Prince Sternenhoch. Out of spite, he marries a lady from the underclass, unaware that she is a witch. The combination of high and low art, philosophy and Baroque literature, horror and farce, pledge an appealing experience.  The captivating piece that has been transformed into opera by the composer Ivan Acher, presents an additional linguistic dimension of Esperanto: “Super experience! It sounds like a rock concert; the lyrics are sung in Esperanto. The opera is quite something in the best of sense – in terms of visual art, direction and choreography. The finest hour for the Opera of the National Theatre,” writes the theatre journal Divadelné noviny. The production received the 2018 Theatre Critics Award for Best Music, with Ivan Acher being the absolute winner in the number of nominations received. The performance is the Festival debut for the Opera of the National Theatre in Prague.

Conflict of absolutism and anarchy, liberalism and autocracy. “Who would have said that the most current stage adaptations about moral crisis of contemporary society would come from the interpretation of an Antique master,” says Júlia Rázusová, the curator of the Slovak programme.
The Bacchae is a new production directed by Rastislav Ballek for the Slovak National Theatre. It is a thought-provoking tragedy about present-day man trapped in moral extremes. The production features an excellent cast – Milan Ondrík, Dominika Kavaschová and Daniel Fischer, members of the young actors’ generation at the Slovak National Theatre.

Has the Bible, as a guide to moral life, retained its currency?Is it the source of spiritual consolation or a historical document that raises polemics? These are questions addressed by the theatre Divadlo Aréna in its daring dramaturgical experiment with a simple title The Bible. The stage will be solely occupied by the actor Juraj Kukura, The Bible, and compositions by Bach, Haydn, Mozart and other giants as presented by the Slovak Philharmonics.

Unfreedom of the political system that surrounds us

An ordinary man suddenly finds himself being interrogated. Yet he nor the police officers have any idea why so. Still, they are kind, trying to show him – a man worn by life – to show the meaning of life in this world.   The comedy A Man from Podolie, the last of works by the director Mikhail Ugarov who died unexpectedly last year, is steeped in absurd humour. Yet, more deeply it reflects the issues brought about buy the acquired freedom in the post-Soviet territory and civil uncertainty in a country where laws and their interpretation can be changed anytime. In Russian, Teatr.doc has the status of dissident theatre. The company previously featured at Divadelná Nitra with their productions Oxygen, Two in Your House and, most recently, the coproduction Viatlag, that brought to life diaries of a Gulag inmate.

Machinery squashing a man is the legacy of the cult novel Catch XXII that makes a comeback on Slovak stage after three decades. The Andrej Bagar Theatre was the second n Slovakia to stage Heller´s dramatisation of the novel that warns against the fatal threat that bureaucracy can pose on the freedom of individual. The production, with ambiance live music and playful directorial interpretation by Ján Luterán also touches upon Slovak context, enjoys high viewer popularity.

Manipulation is easy, particularly is a roughneck skilfully covers lies with witty humour and conduct that wins sympathies. The monodrama
Moral Insanity from the Prešov National Theatre invites Festival visitors to enter the underworld of a dirty information game. Inspired by Umberto Eco, the co-author of the text and actor in one, Peter Brajerčík, sheds sharp light on contemporary social tendency to believe hoaxes, fake news and conspiracy theories. The production illustrates the work of stage director Júlia Rázusová, the curator of the Slovak part of the 2019 main Festival programme.

Without an address one isn’t entitled to freedom. The politically concerned production from Hungary, Addressless – Vagabond Role Game is brought by the ensemble STEREO AKT in their debut at Divadelná Nitra. The performance literally draws spectators into the dead-end situation of the homeless today. Performative interactive play about how to survive on the street make spectators contemplate the choice between altruism and comfort zone. Would you offer a helping hand, or is it easier to turn away? In addition to the actors, the performance also features a person who is homeless in real live, and a field worker.

Healthy body isn’t merely home to healthy spirit, but also to unhealthy nationalism. The comedy Second Essay on Gymnastics comes from the independent German company Hauptaktion that also makes its debut at the Festival. The production explores the gymnastics movement Turnen and its connection to different historical periods in Germany over the 200-year history of the movement. The ensemble of eight performers presents on stage a grotesque catalogue in which the exercising bodies articulate the ideals of their time.

Art without Limits – freedom to create

Divadelná Nitra will also offer space for unconventional projects that build upon crossing limits – such as genre, mental and physical limits The production eu.genus by the company Honey and Dust / Med a prachoffers an extraordinary experience that takes spectators into an art studio. There, directly at a public rehearsal, spectators will be given the freedom to move between the ideas of the stage director Andrej Kalinka and his team.

A clown show for adults?The excitement of building image castles and their subsequent destruction. The joy of discovery of items of everyday use and of inventing their new purpose. The light and gripping production by the Czech experimental ensemble Wariot Ideal, The Depths is a celebration of imagery. “A mime, musician and fine artists come across like Svěrák’s classical three bugs transposed to the surrealist world of Švankmajer; spectators are invited to join in,” explains Ján Šimko, the curator of the Festival international programme.

Theatre about the loss of communication between relatives

When two modern people, as if cut out from happy-living guides, start longing for yet another toy, they get themselves a dog. Even though they don’t know how to look after it. Contemporary Polish comedy Holy Noodle by Komuna Warsaw, directed by Agnieszka Smoczyńska, offers a unique take on life in partnership that has been hollowed and it explores it, idiosyncratically, through the eyes of a dog named Noodle.

Divadelná Nitra presents, after some time, a piece that will draw both children and adults. The award-winning production Stories of Walls by the Bratislava Puppet Theatre offers visual artistic experience for anyone aged from9 to 99. The stage director Katarína Aulitisová, in tandem with the fine artist Markéta Plachá, created an ingenious mosaic of personal and public walls and borders which we keep hitting upon.

All information about the forthcoming 28th edition of the International Festival Divadelná Nitra, held from 27 September to 2 October 2019 in Nitra, will be available on the redesigned website. Along with website, Divadelná Nitra is launching online tickets sale that opens on 1 August 2019.

Tickets are available at: