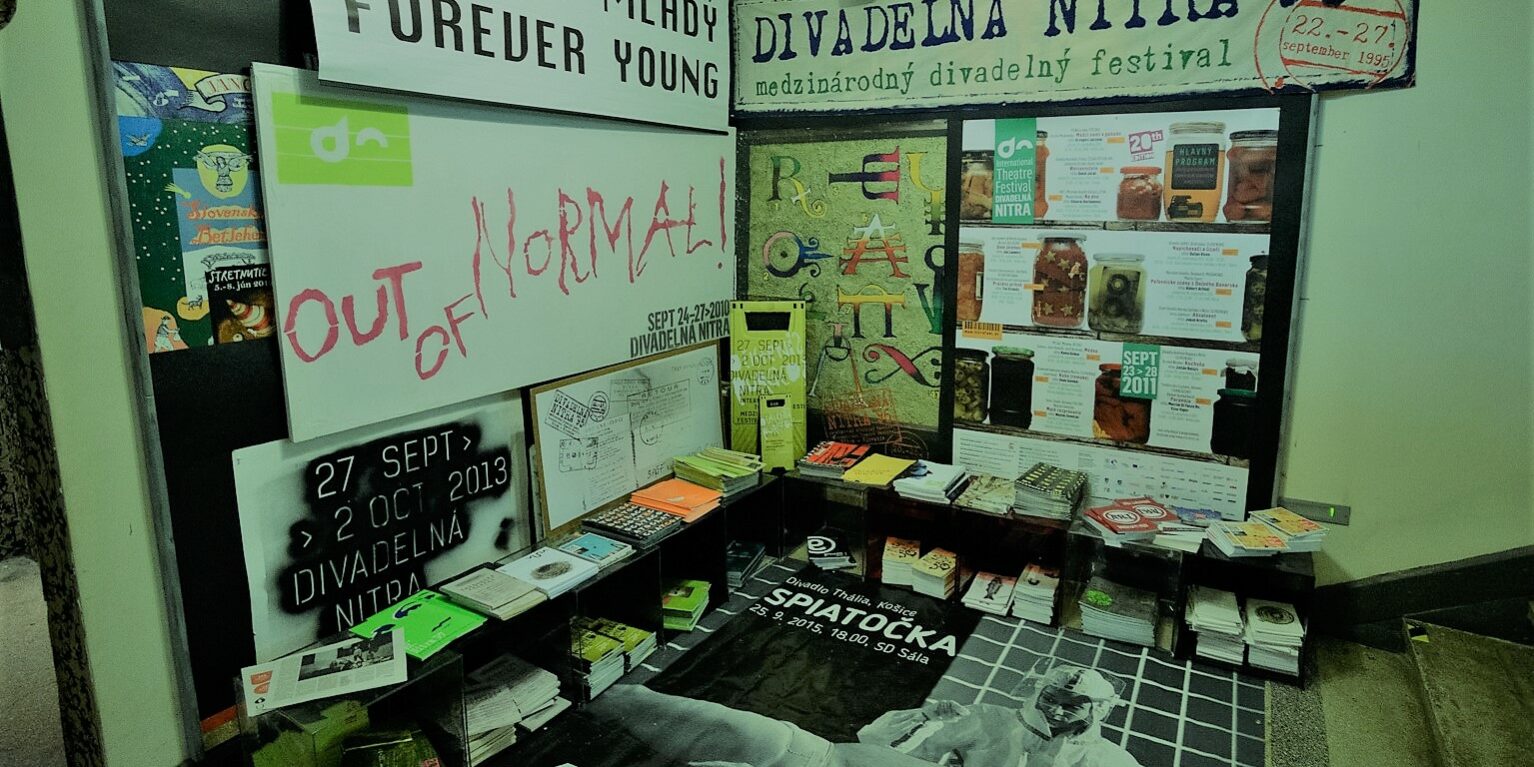 On Thursday, 26 May 2022, during the networking meeting of the Association Divadelná Nitra and culture stakeholders from Nitra and its surrounding region,
a presentation of e-publication
Transcending Divadelná Nitra 1992 – 2021 will be held in bod.K7.

The publication follows upon the volume … Desire Alive for Beauty – International Theatre Festival Divadelná Nitra 1992 – 2016 (ed. ADN, 2016) that reflected 25 years of the Festival largely in terms of the main programme, presented theatres and theatre leaders from abroad and Slovakia. Transcending Divadelná Nitra 1992 – 2021 addresses the phenomenon of the International Festival / Association Divadelná Nitra and its overlaps in different fields of cultural, social and political life of the city of Nitra, of Slovakia, the region of Central Europe and further afield in Europe. The guiding principle is to present the Festival as a platform, mediator, bearer of impulses for contemplating art and society, a litmus test of the state of public affairs. The publication features exclusive professional studies, essays, analyses and interviews with influential names in science, culture and art – Miroslav Ballay, Slavka Civáňová, Dominika Dudášová, Elena Kárová, Darina Kárová, Martina Mašlárová, Karol Mišovic, Juraj Novák, Martina Pecková Černá, Ján Šimko, Soňa Šimková, Romana Štorková Maliti, and Martina Vannayová.

While the previous publishing project … Desire Alive for Beauty … essentially focused on the main programme, featured European influential theatre makers and themes, dialogue between Slovak and international performing arts and authors, Transcending tells another story. It completes the overall portrait of the past thirty years in terms of the International Festival, but also of other projects of the Association Divadelná Nitra that are dedicated to learning and working with spectators, artistic reflection and critical thinking, interventions in public space, integration, participation, and community relations. It also presents invaluable lists of featured works, photographs, an overview of the Festival visuals and themes, lists of hundreds of co-organisers, partners, donors, staff members, volunteers, collaborators of a range of professions, in sum, all those who have been part of the three decades of the Festival.

Particular value of Transcending lies in publication of facts and documents from the history of the Festival that contains the unexplored archive of the Association, and in placing the Festival in the context of similar events in Central and Eastern Europe. Equally, it reveals the overlaps of the Festival and other Association projects in cultural, social and political life of Slovakia. Transcending is intended primarily for the professional public within theatre and culture studies, students in humanities, specialists on theatre and culture management, but also for spectators and fans of the International Festival Divadelná Nitra, along with a reader interested in culture.

The publication is the fruit of over a year of research and presentation of its output in form of conference papers at a theory event within the 30th edition of the International Festival Divadelná Nitra on 3 October 2021. Transcending will be published in two versions, electronic (which is the subject of the current presentation) and printed (forthcoming, January 2023). The publication has been made possible with the grant support from the Slovak Arts Council in 2021 and 2022. The Bratislava Theatre Institute participates in the preparation of the publication.