The Tulip bloomed in January 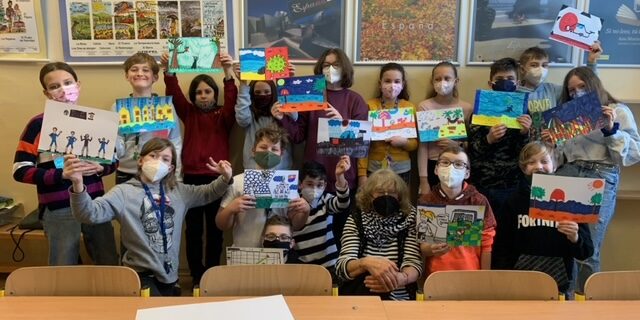 A Tulip for You is a highly successful creative integration workshop for visually impaired and blind children organised by Association Divadelná Nitra since 2007. From 2009 on, the project comprises year-long activities, which, unfortunately, have also been restricted by the pandemic. This is why, all the more joyfully a couple of days ago, the project’s supervisor, academic sculptor Elena Kárová met its participants – children from Prince Pribina Elementary School in Nitra and Bratislava’s Elementary Boarding School for the Visually Impaired. Though the current situation has made their meetings few and far between, both were all the more vigorous with drawing and thinking about the children’s hopes and worries in this strange time. “They were best reflected in strikingly telling and beautiful drawings,” shared Elena Kárová, whose Tulip for You Club in Bratislava welcomed many a newcomer. “The boarding school educators brought a couple new children with residual vision and four totally blind little ones. I brought them drawings by children from Nitra and they literally took hold of them and moved them to draw,” adds Kárová. She describes the drawings to blind children with words, and ensuing discussions inspired and guided them to ideas about what they would model on the shared subject of their ‘biggest joy and worry’. You can look forward to the results of the little makers’ efforts at an exhibition due to open in our space for culture and creativity bod.K7 at the beginning of March.

From the personal notes of Elena Kárová:

21 January 2022, Nitra
We still have to work with children separately. We hosted a beautiful workshop with refreshments in the ‘Nitra bubble’. We at least try to ‘patch up’ what has been overdue since the Christmas meeting, which Nitra children could not arrive at for two years in a row due to school closures. All the more vigorously, the children drew and thought about their hopes and worries, in this strange time, both for them and us. The children’s dreams and unease were best reflected in strikingly telling and beautiful drawings.

26 January 2022, Bratislava
The meeting in the Tulip for You Club was a first in several respects. First since the New Year, first in our beautiful club after nearly two years, and first for newcomers. Children who had come for the Tulip before the pandemic grew up so much they are hard to recognise. The boarding school educators brought a couple new children with residual vision and four totally blind little ones. Seasoned Tuliper Vanesa arrived from the boarding school and turned on her heel straight away, once she realised I wasn’t letting her in without a mask. So we are starting over. The space’s kindness aids our return to the old, beloved Tulip atmosphere. We have a time-tested language, programme and customs… Tulip veterans explain it to the rookies. They haven’t forgotten anything.