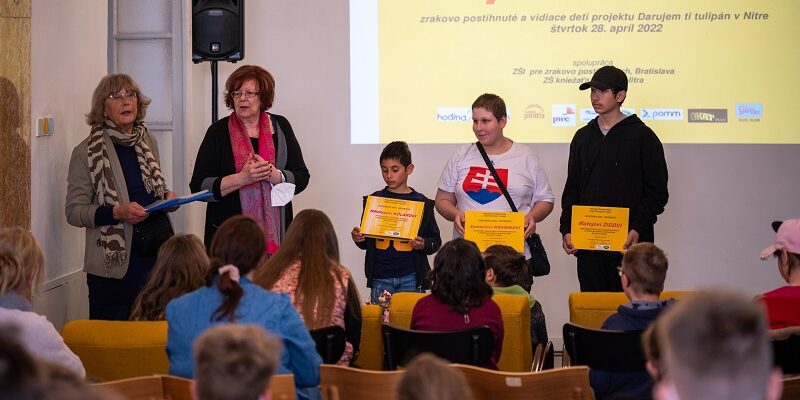 The exceptionally successful project of integration of creative activities for visually impaired and blind children, run by the Association Divadelná Nitra since 2007, welcomed over 30 of its members to the workshop at bod.K7. Three of them received valuable gifts.

The project A Tulip for You centres its activities in the CLUB A TULIP FOR YOU, founded in 2009 by the Association Divadelná Nitra at the Primary Boarding School for Visually Disadvantaged Pupils on the street Svrčia in Bratislava. The Club and its activities are led by the project founder, the sculptor Elena Kárová. On Thursday, the visually disadvantaged children from Bratislava met in bod. K7 with one of the project coordinators, The Prince Pribina Elementary School in Nitra. “I am ever so happy that we are together. The two years were not easy. Let’s appreciate this moment. I am grateful and moved, I do it for you,” Elena Kárová gave way to emotions as she received a bouquet from the director of the Association Divadelná Nitra, Darina Kárová, as a token of gratitude for 18 years of work with blind children. “After the pandemic, I realised how important this was to them. Over the past two years, many of us have been recapitulating. I came to realise that these children definitely need to be helped. All activities now make even more sense to me,” added Elena Kárová. She is holding an integrative art workshop for Ukrainian and Nitra-based children at bod.K7 on 17 May 2022.

One often hears of integration. Yet, the project A Tulip for You, makes it happen in practice. And it benefits both parties. “Just this trip is something enormous. Visually disadvantaged children do not exist at all in the world of the majority. They live in their bubble. It doesn’t tend to happen to them to be received by an organisation. It doesn’t happen to them either that someone presents them and their works at an exhibition. This is quite something for their healthy self-confidence that means an awareness of their worth,” said Elena Kárová. She points out that the project also affects children without disadvantages. “They are different. More sensitive and receptive.” The tutor at The Prince Pribina Primary School in Nitra, Mgr. Ivana Poljaková who has been associated with the project A Tulip for You for over 11 years, confirms Kárová’s point: “Children, but also we, the adults, seldom meet the visually disadvantaged. We thus have an opportunity to realise that such people are indeed among us, and they need not just our help but also understanding.” Poljaková brought to the workshop pupils from the form 5.B. Their cooperation with the children from Bratislava recently motivated them to launch a public collection on behalf of Ukrainian children. “Meeting visually disadvantaged children has a very positive effect on them. Our pupils admire how they can take care of themselves and the range of artworks they can make. And we admire their tutors and teachers,” added Poljaková. Some of the artworks are on display at the exhibition Tulip Windows in Za sklom Gallery until 7 May 2022.

The meeting at bod.K7 included a creative workshop for children from the Bratislava- and Nitra-based primary schools, as well as a symbolic award of three computers to three gifted visually disadvantaged children. “Our gratitude goes to the partners of the project A Tulip for You, among others, Jaguar – Land Rover and the Pontis Foundation. It was with their support that we were able to donate computers to three pupils of the Primary Boarding School for Visually Disadvantaged Pupils. The computers will be equipped with special software for the visually disadvantaged. That will make it even easier for them to communicate with the outside world and support their creative path,” said Darina Kárová, Director of the Association Divadelná Nitra.