The message of Catch-22 is still alive. New productions from Russia and Slovakia 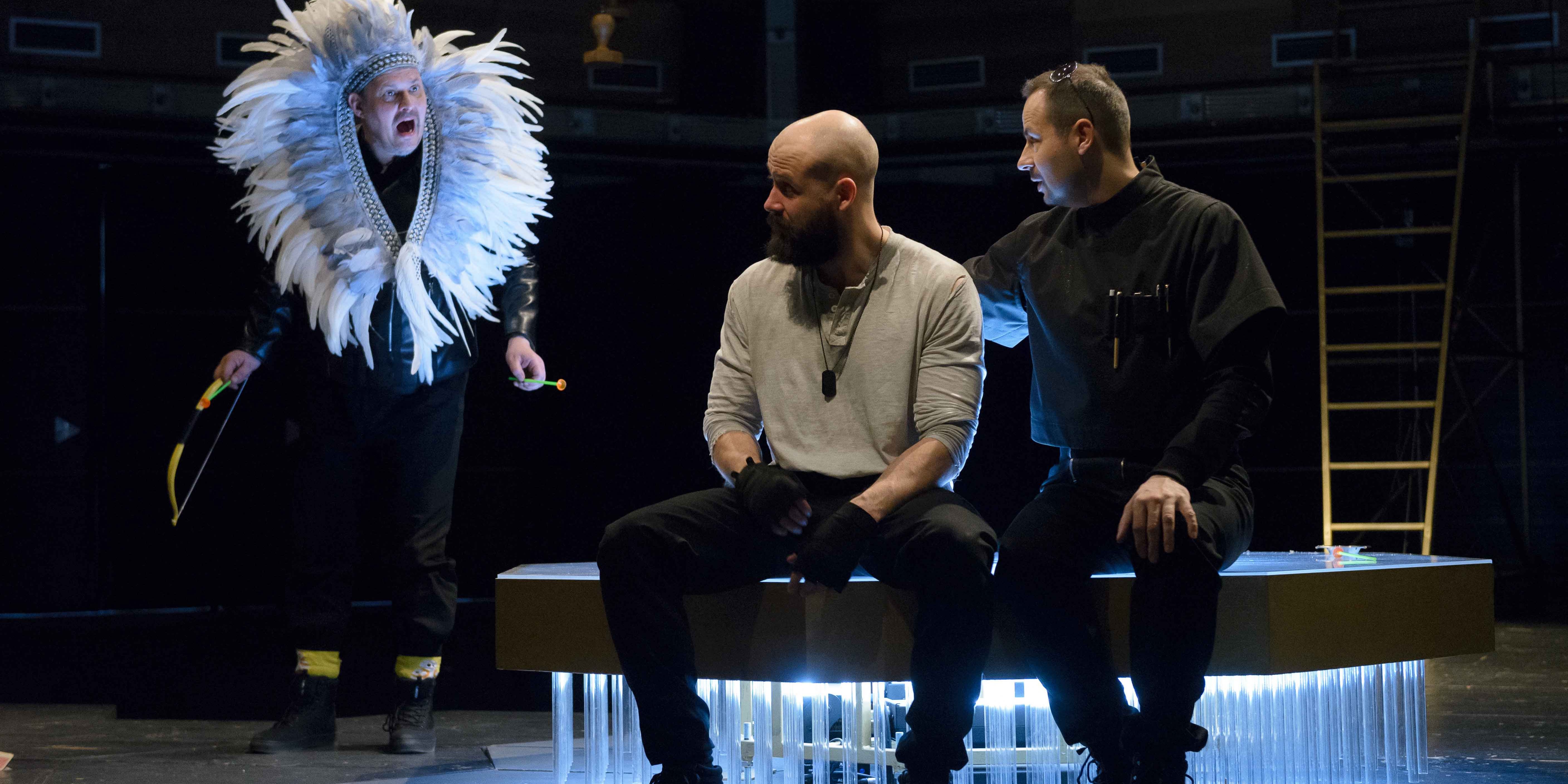 Our fight for freedom has not come to an end with the fall of communism. Stories of men and women who face systematic manipulation are still written in today’s, free age. Some are told byplays in the main programme of the International Theatre Festival Divadelná Nitra (27 September – 2 October 2019).

Gaining one’s freedom is fundamental, but coming to grips with it is not always easy, and this is the subject of a new play by the legendary Russian theatre Teatr.doc, A Man from Podolsk. This play written by the Russian author and poet Dimitry Danilov channels both wit and a certain dose of gloom, and invites us to reflect on the concept of ‘patriotism’, lying at the heart of many of today’s conflicts. As one of the highlights of this year’s Divadelná Nitra, it offers audiences several interpretive layers, for instance the theme of a disconnect between two successive generations.

The protagonist in this absurd comedy is a regular fellow, a news editor, who suddenly finds himself interrogated at a police station. Neither he nor the policemen apparently know why. “The play is set in a Moscow police station that is a gathering place for eccentric intellectuals. Common methods of police torture are replaced by the suffering of a different sort: residents are given a terrifying survey that cannot be completed unless one overcomes a feeling of overwhelming emptiness and uselessness,” the play was described by the Russian cultural magazine Afisha. Teatr.doc enjoys the reputation of a dissident theatre in Russia. With this play, it responds to the situation at home, an atmosphere pervaded by civil uncertainty, where laws and their interpretation can change at whim. In light of the news that are reaching us from Russia, A Man from Podolsk appears to carry a highly relevant message. It was the last play produced by director Michail Ugarov, who passed away unexpectedly last year. Teatr.doc have already appeared at Divadelná Nitra in the past, with their plays Oxygen, Two in Your House and most recently Viatlag, produced in collaboration with Drama Laboratory.

The absurd mechanisms of a society where all orders exceed the limits of the human are also the subject matter of the cult novel Catch-22. It is brought on stage by the Andrej Bagar Theatre in Nitra, who have adapted Joseph Heller’s story and made it more accessible to Slovak audiences. Director Ján Luterán’s interpretation bursts with references to the current socio-political situation, without lacking in black humour. “One of the most disheartening feelings experienced by the protagonist in Catch-22, and with him every audience member in his right mind that desires freedom, is powerlessness in face of arbitrary and arrogant power, of powerful people who abuse their position to their own advantage and who are incompetent to hold it. One can live an entire life feeling this way. Finding the courage to leave one’s comfort zone and to oppose fools, tyrants, liars and criminals is the most burning task for anyone who aspires to freedom in our society,” says director Ján Luterán. The protagonist, Captain Yossarian, who faces up to this duty, is played by Daniel Ratimorský. His unaffected performance contrasts with the stylised and parodied traits of other characters, resulting in a fruitful tension on stage. The play also features a distinctive set design by Michal Lošonský and an exceptionally lively acoustic musical accompaniment by the actors themselves.

The danger that prejudices and ideological beliefs may eventually transform into radical attitudes and behaviors an issue that plagues the modern age. The manipulating opinion takes little effort in the current atmosphere, especially when society is prone to believe in fake news, hoaxes and conspiracy theories. The consequences are endless. Current social and political events in Slovakia serve as the setting for an original monodrama titled Moral Insanity, performed by Peter Brajerčík, which earned the Grand Prix at the New Drama festival 2019. This work, rehearsed at the Prešov National Theatre in collaboration with director Júlia Rázusová, was inspired by Umberto Eco’s Prague Cemetery. “People often freely embrace a certain belief. But behind this free choice, there may in fact be an elaborate and precisely calculated disinformation campaign. We try to uncover the principles of such campaigns. With the advent of the internet and social media, everyone can express their opinion without accountability. People spreading hate are gaining more and more self-confidence as their views are disseminated by others. Thankstofreedom, we still can and must confront and prove these people wrong,” says Peter Brajerčík. In Moral Insanity, he portrays one such thug who does not shy from abusing the freedom of expression to his own ends, even at the expense of others. “At the same time, we try to reflect the individual’s incapacity to free him or herself of inherited and inculcated beliefs and stereotypes. It is a conflict between internal ‘unfreedom’ and external ‘freedom’ that can even lead beyond the limits of what is human,” Brajerčík adds.

Besides performances in the main programme, Divadelná Nitra will also feature a rich accompanying program that will reflect on this year’s festival theme – Podoby slobody / The Faces of Freedom.

The 28th year of Divadelná Nitra will include performances and events at the Andrej Bagar Theatre in Nitra, the Karol Spišák Old Theatre in Nitra, the Synagogue, Nitra Gallery, the Regional Education Centre, the Karol Kmeťko Regional Library, as well as the Párovské Háje Culture House and at other cultural institutions, at the Festival Tent and elsewhere on Svätoplukovo námestie.