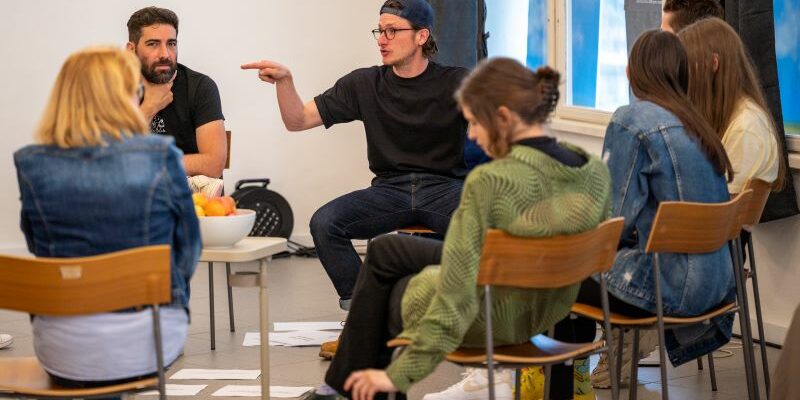 At the turn of April and May 2022, bod.K7 – new space of the Association became the venue for the creation of a new international piece #generation(s). The first performance of the intergenerational work of professional artists from the French group Le Cri Dévot and the current generation of teenagers was presented as work-in-progress in bod.K7 in Nitra on 7 May 2022 at 7 pm.

The two-week residency in Nitra is part of a creative process that is underway in other (not only) European cities – Sansepolcro (IT), Gothenburg (SE), Lozère (FR), Montreal (CA). The outcome will be a piece that is to set a mirror and confront young people born in an interconnected world. A world where they move like never before, in an area without borders, in Europe with deepening cultural convergence. The project shall inspire and encourage them to address specific public issues – such as the #metoo and blacklivesmatter movements, the law of marriage for all, conspiracy theories, cyberbullying, and global warming.

This intergenerational crossover is to enable young people to free their words, brighten them and thus help them break any prejudices that adults may have about teenagers.

How do these topics affect their everyday lives, how do they touch their comfort zone and how do they deal with them? What do the observations of teenagers from Slovakia, France, Italy, Sweden have in common?

The residency was part of the international project Be SpectACTive! launched in December 2014. It is a large-scale project of pan-European cooperation supported by the European Union Creative Europe scheme. It focuses on performing arts where it seeks to support active participation and involvement of spectators in creative processes through artistic creation.

More about the #generation(s) project: https://www.lecridevot.org/generation-s