Be SpectACTive! in Nitra 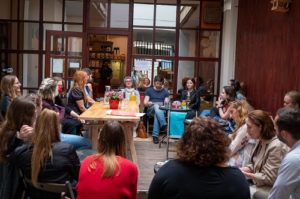 Association Divadelná Nitra has been invited to join the Be SpectACTive! Project in view of the artistic successes of the International Theatre Festival Divadelná Nitra and its organisation of activities in the field of audience development. Joining the BS 2 Project too will allow the Association to continue these activities, moving from educational projects for audiences toward creation with audiences and participative dramaturgy. The aim of the project’s many outputs is to engage audiences in Nitra, stimulate local cultural involvement, foster education in the sphere of culture and develop community life. The City of Nitra purports to join the ranks of modern European creative cities, following the so-called “eventful cities” concept.

“Our long-term objective is to form engaged residents in Nitra who feel responsible for what goes on in their city. One of the project’s major benefits is that it is in no way limited locally despite its local orientation. To the contrary, it creates trans-local connections by means of a wide network of partners as well as thanks to the international scope of the International Theatre Festival Divadelná Nitra,” summarised Anna Šimončičová, the project manager.