Dive into the depths of thedramatic imagination. Discover visual art, film and music 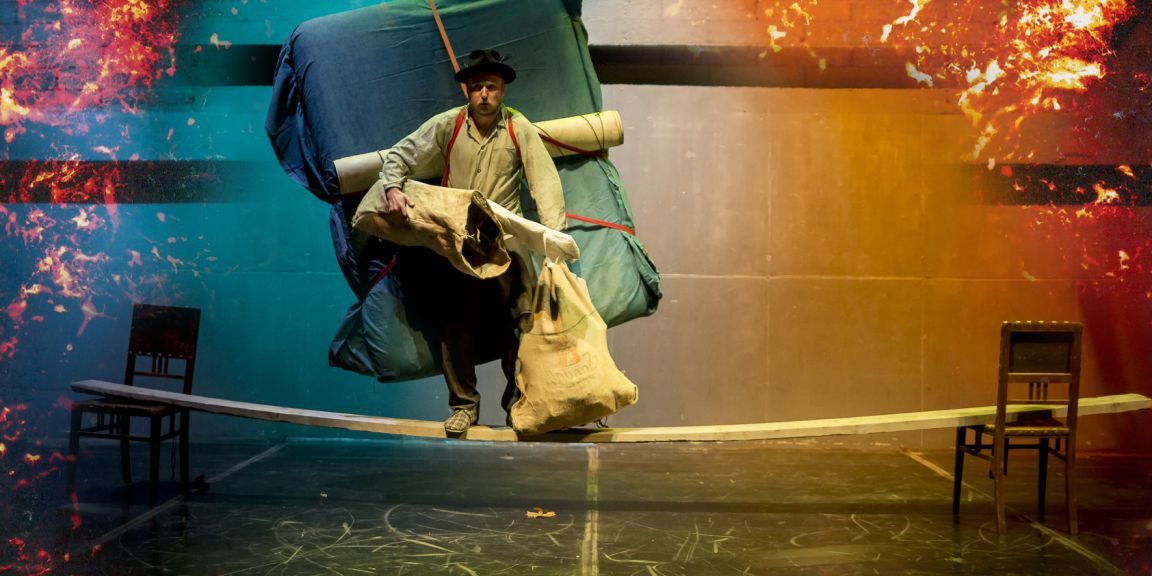 A clown show for adults. Folklore stripped to the bone by radicals of nonverbal drama. Such epithets have been applied to The Depths, an original play by Czech collective Wariot Ideal, who will make their second appearance at Divadelná Nitra. Their creative team, consisting of artist Jan Dörner, musician Jan Kalivoda and mime Vojtěch Švejda, will be given free rein on stage and use its every inch to deliver one theatrical surprise after another. Be it by transforming everyday objects into musical instruments or by performing entertaining acrobatic feats. Wariot Ideal lead a dauntless expedition into the depths of the surreal to uncover the personal and social roots of our culture. In The Depths, they explore the possibilities of theatre as such and descend to the foundations of the Christian faith and pagan rituals.

“TheDepthsis a remarkably interesting production in its grotesqueness and surreal form, which grows out of entirely ordinary situations. Dörner, Kalivoda and Švejda create a spectacle that feels like the good old Three Bugs only suddenly plunged in the surreal filmic world of Jan Švankmajer or like Svěrák’s Kukyon his way from a psychedelic vacation. Their stage ritual is a defence against numbness and a celebration of the powers of fantasy,” explains Ján Šimko, curator of the foreign programme section, who considers The Depths a highly satisfying piece. Audiences will easily spot its references to silent firm or the Czech pantomime tradition. The performance is bolstered by distinctive costumes, music and an interesting set design. “I think that the joy with which the actors perform on stage is contagious, to say the least.” Wariot Ideal have already appeared at Divadelná Nitra in 2013 in the off-programme, when they hit the streets with their grotesque performance The Undertakers.

Another production that promises to spur the audience’s imagination is eu.genus by the loose SlovakartistsensembleMed a prach, directed by Andrej Kalinka. Audiences, too, will be invited to create. They will visit an open rehearsal in an art studio and move freely among the director and artists. The creators will offer them a chance to step on stage and ‘feel it around’one hour prior and a half an hour after the performance. Anyone who wants can join.

Their musical-visual-physicalperformance thematises overlaps in theatrical genre and problematizes the idea of artistic creation, without pretenceand with a subtle does of humour. “Med a prach strive always to be free in how they approach their subject matter and offer audiences a unique theatrical experience, for instance, when you are sometimesmade part of their concept,” says curator Júlia Rázusová, who chose this production for the Slovak programme section. This unusualproduction is underlined by a diverse musical accompaniment –from the compositions of P. I. Tchaikovsky or T. L. de Victoria to Georgian folk music. eu.genus also features performances by dancers Zebastiáno Mente Maligna, Lívia Balážová and Daniel Raček, accompanied by musical actor Ján Morávek, who bring their personal stories and takes on physical theatre on stage. The production also incorporatesvisual art created by Juraj Poliak and Andrej Kalinka. This new piece by Med a prach raises important questions – what constitutes good lineage, who we are and what forms us – and invites audiences to search for their own answers.

Besides performances in the main programme, Divadelná Nitra will also feature a rich off-programme that will reflect on the current year’s festival theme – Podoby slobody / The Faces of Freedom.

The 28th year of Divadelná Nitra will feature performances and events at the Andrej Bagar Theatre in Nitra, the Karol Spišák Old Theatre in Nitra, the Syagogue, Nitra Gallery, the Regional Education Centre, the Karol Kmeťko Regional Library, as well as the Párovské Háje Culture House and at other cultural institutions, at the Festival Tent and elsewhere on Svätoplukovo námestie.

DNArchives have another face!
27. February 2021

Cultural events can be organised even in times of crisis
26. October 2020

Current changes to the programme of ITF Divadelná Nitra 2020
21. September 2020