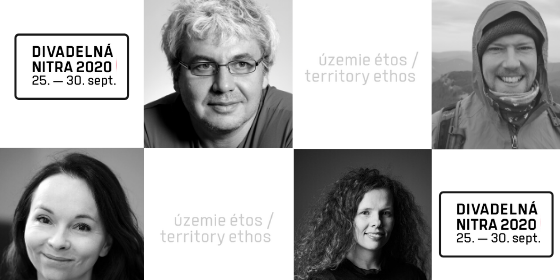 Each year, the main programme of Divadelná Nitra is created by seasoned theatre professionals with many years worth of experience, and their curatorial selection reflects the theme of the given festival year. For 2020, the Board of Curators has grown by four colleagues from Dotyky a spojenia Festival, who, in addition to their selection in Martin, will also be entrusted with choosing the best Slovak productions for the 29th International Theatre Festival Divadelná Nitra. This will be the first time these two prominent events will engage in such close collaboration. The four curators, who hold anannual exhibit of each year’s theatrical season in Martin, will now try their hand at the principles of festival selection, enhanced possibilities of space, and a choice of productions not confined to the current season.

Their artistic interpretation of TERRITORY ETHOS will take centre stage at Divadelná Nitra this coming September.

Until then, allow us at least briefly to introduce them.

Graduated in theatre dramaturgy from the Academy of Performing Arts in Bratislava. Since 2004 she has been engaged asdramaturge at the Slovak Chambre Theatre in Martin. She is a founding member of the theatre festival Dotyky a spojenia. At present, she serves as the festival’s programme director.

Theatre critic, member of the Slovak Centre of AICT. She is currently a doctoral student, lecturer and associate dean for studiesat the Theatre Faculty of the Academy of Performing Arts in Bratislava. Besides her academic occupation, she is also an editor for the theatre monthly kød – konkrétne ø divadle as well as the on-line magazine www.mloki.sk, published by the young theatre critics platform MLOKi. She has worked for several Slovak festivals (Nová dráma/New Drama, Dotyky a spojenia, International Theatre Festival Divadelná Nitra) as a member of the dramaturgical board, juror or curator. She occasionally translates from/into French and English.

Róbert Mankovecký is a Slovak dramaturge and composer. He graduated in theatre and film studies from the Theatre Faculty of the Academy of Performing Arts. Since 1991 he is dramaturge at the Slovak Chambre Theatre in Martin. He has composed roughly 350 scores of theatre music, produced soundtracks to about 50 television films and theatre productions and 40 radio dramas. He is twice recipient of the Dosky Award for Music for his scores to the plays The Štúrs and National Cemetery, and the Slnko v sieti Award for his soundtrack to Muzika. He co-founded the theatre festival Dotyky a spojenia.

Theatre critic and up-and-coming theatre scholar.  Until 2020 he was editor-in-chief of the theatre journal kød – konkrétne o divadle; he is currently a research assistant of the Theatre Institute in Bratislava and a doctoral student at the Theatre Faculty of the Academy of Performing Arts. He co-curates the selection for Dotyky a spojenia Festival, moderates a discussion series titled Science in Theatre in Bratislava’s Studio 12, and is a member of the Slovak Centre of AICT and the MLOKi young theatre critics platform. Besides critical reflections on contemporary theatre and occasional reconstructions of historical plays, his primary area of focus is on the ways in which various approaches and influences of environmental thinking affectcontemporary theatre and, of course, the reach and impact of theatre on the environment.