Cultural events can be organised even in times of crisis 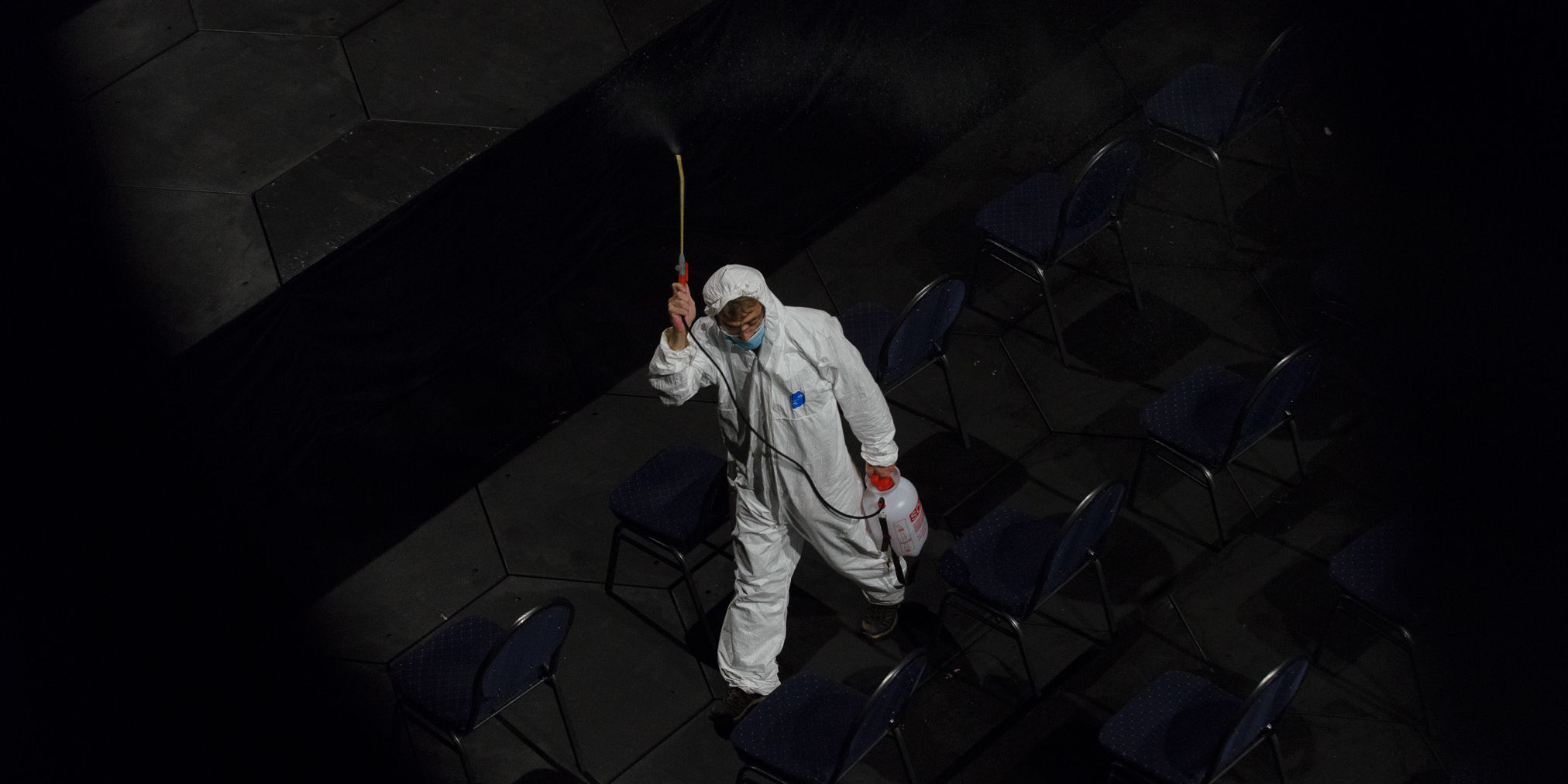 About an hour before the ceremony, I hurriedly rewrote my thank-you speech. It turned out that we wouldn’t be organising one of the last performances in Slovakia for long before the ‘great break’ – the government’s anti-epidemic measures had changed that afternoon. Public cultural events could continue to be held even after 1 October, albeit at a radically lower capacity – 50 people including performers and attending personnel. We played for 250 observers in the Great Hall and for 70 in the Studio, personnel excluded.

Two weeks have passed and everything is still otherwise – theatres will perform no shows at all. We were fortunate enough to make it. Others weren’t as lucky: Bratislava in Movement, Sám na javisku Monodrama, … In the words of a certain theatre-maker: “Your festival barely scraped through.” What is most important, however, is that Divadelná Nitra really became a safe space for encountering art in line with its titular theme ‘territory ethos’. Now, two weeks after the end of the festival, we can cautiously declare it safe. The staff and some volunteers underwent a test after their 5-day-long isolation, and we have no knowledge that anyone from the organising team, volunteers or audience fell ill after the festival. We attribute this to our adherence to a complex of genuinely strict hygienic measures.

The way was difficult and strewn with obstacles. In the vocabulary of crosswords: an anabasis. Besides the production management of all 13 performances in the main programme and over 30 events in the accompanying programme, a separate hygiene management ranin parallel. It began in August with the purchase of hundreds of single-use face masks, gloves, dozens of touchless dispensers, plastic shields, thermometers, canisters of disinfectant. It continued with the issue of an official regulation by Association Divadelná Nitra and establishment of a crisis coordination team. Afterwards, we brought dozens of metal barries and ordered hundreds of stickers printed with safety icons and instructions by the Public Health Authority. Day in, day out, we followed official measures and adjusted our programme accordingly. Each arriving performer, collaborator and volunteer had to fill in a mandatory form. Two thick files containing the paperwork stand on the shelf beside me.

Measures took effect during the spring and we were unable to finalize our programme – theatres were closed, and local and international festival cancelled in rapid succession. Financial resources proved slashed in equal measure – private foundations published no open calls, companies ordered no advertisements. Nevertheless, in early June we resolved to hold the festival. And we found that enough partners remained loyal so as to make this possible.

As we were obliged to fulfil the terms of our contract with the Slovak Arts Council on mandatory international participation at the festival, we programmed at least those productions from our preliminary selection that originated in countries deemed safe for the time being (Czech Republic, Germany, Belgium). And quite systemically, we offered a generous space to Slovak creators, much broader than during the previous festival editions. Considering the theme of this year’s festival, it was something we even considered ethical: lending a helping hand to the local scene in the current predicament, with numerous subjects suffering losses during the coronavirus crisis, by offering them a greater possibility for presentation. We chose a similar approach in devising our accompanying events.

During the latter half of August, we published our programme and launched ticket sales. That is when the real anabasis – what insiders were fond of referring to as ‘change after change’ – actually began. After measures reducing the number of seats at cultural events came into force, we cut the number of tickets offered for sale. After Belgium was classified as a red-zone country in late August, we cancelled two Belgian productions. It was beyond our capabilities to ensure the necessary measures associated with the arrival of Flemish performers. In mid-September, the same thing happened to our scheduled Czech performances. As the German production had already been struck off earlier (measures concerning mandatory distances, frequent ventilation and disinfection were impossible to fulfil in the selected specific site), nothing was left of the international programme. We feverishly filled the vacant performance slots with Slovak productions. As actors say – ‘as substitutes’. At that point, we had not suspected that some of the performances in our Slovak selection would be cancelled on preventive grounds by the theatres during the festival.

Once again, we looked for substitutions. When an ensuing measure prohibited holding events in catering established, we moved a part of the accompanying programme from outdoor restaurant terraces elsewhere. The international critical reflection project took place entirely online due to the physical absence of its participants in Nitra. And so on. But we performed every night. And some of the ‘substitutes’ were received more than positively. “An attack is a gift of energy,” says a Chinese proverb. That feeling of constant new obstacles to surmount, like conquering an enemy on the front line, gave us strength. We had to push through.

Audience members had their temperature taken and hands disinfected at each venue. Volunteers at the guest registration desk were separated by a thick layer of plastic foil. Building entrances and outdoor performance venues were marked with metal barriers in order to maintain distances. Electronic crowd counters gauged visitors throughout, so that we might have real-time data on their numbers. A fine of 20 thousand euros was a strong enough deterrent.

One of the festival’s main co-organisers, the Andrej Bagar Theatre, where most of the main programme took place and where the whole organising team was stationed, enforced its own measures as per its Director’s Notice. The stage, hall and foyer were disinfected before and after each performance. Cleaning ladies sanitized all toilets and surfaces every hour. The entire backstage, including halls, offices and staff premises, was completely disinfected twice per day.

No, we do not mean to compare ourselves with the iconic Salzburg Festival of August 2020, with a turnout of 75 thousand visitors, nearly 4 thousand tests for performers and zero cases of infection. Such an outcome would have probably been impossible nowadays. We only wish to demonstrate – on the example of concrete methods, the intense motivation of dozens of individuals, and accessible, financially viable hygienic measures – the fact that cultural events can be organised even in times of crisis. In keeping with all anti-epidemic measures. It does not need to (and indeed cannot) be right now. But we should be prepared when the time comes.