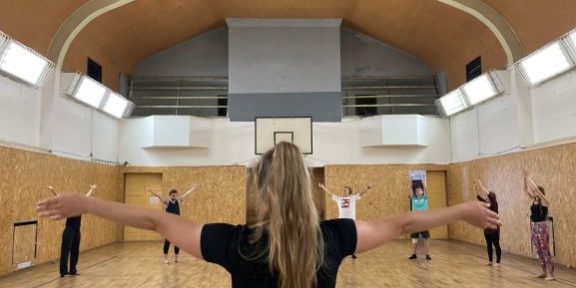 Be SpectACTive! continues. Icarus and Blue is the Colour are nearing the finish line. The Audience Programme Board has made its choice

After a month, teenagers from Nitra and Prague again met in the Czech capital for rehearsals of the upcoming production Icarus. Under the guidance of Marie Gourdain and in collaboration with Jaro Viňarský (SK), Václav Kalivoda (CZ) and Jordim Galím (ES), they added final touches to their dance production made for the international project BeSpectACTive! Intense work throughout the summer will culminate in two ceremonial premieres: one in September at Tanec Praha festival, the other in October during the International Theatre Festival Divadelná Nitra.

At a meeting in July, members of the Audience Programme Board, formed in 2019, gave their mark of approval to 5 productions. The public will see them featured in the programme of the International Theatre Festival Divadelná Nitra 2021. We will publish the titles of the selected works soon.

Association Divadelná Nitra joined the international participative project Be SpectACTive! in 2018. Together with other European partners, we involve citizens in artistic production and dramaturgy and thereby promote their activation and the development of cultural life in cities.